Father of 11 children, he devotes his free time to the maintenance of traditional art recently classified as World Heritage by UNESCO

When he’s not hauling concrete blocks to a construction site in northern Iraq, Jamal Hussein devotes his time to preserving the gentle art of Arabic calligraphy.

Although he won prizes in many competitions, Hussein acknowledged that “you can’t live off this” – the artistic writing of Arabic script.

“I have a big family. I have to find another job,” said the father of 11, who is 50 and earns his living working on construction sites in the Iraqi Kurdish town of Ranya.

“The fluidity of Arabic script offers endless possibilities, even within a single word, as the letters can be stretched and transformed in many ways to create different patterns,” UNESCO said on its website. 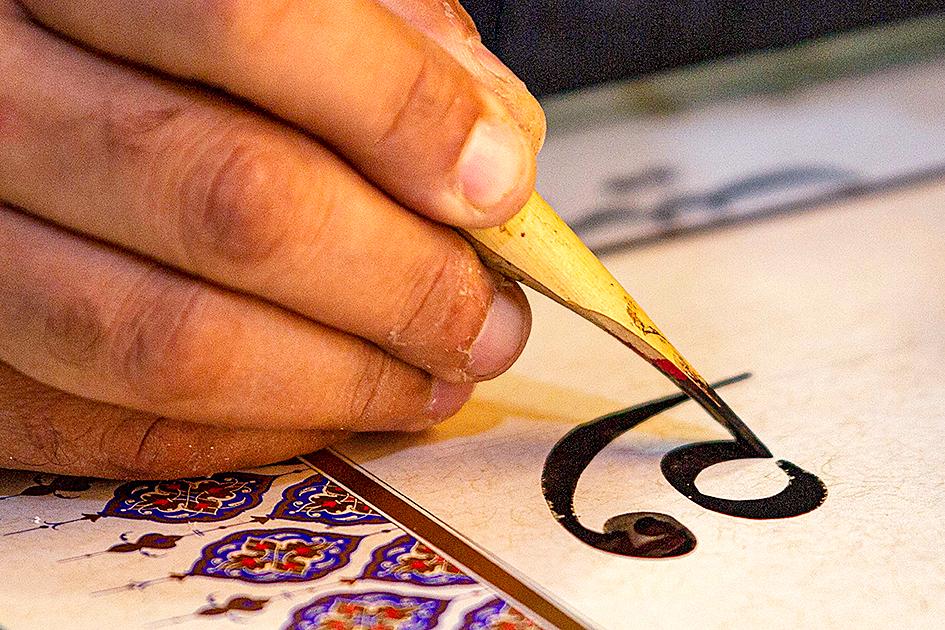 Hussein is one of them and he hailed UNESCO’s decision. He hopes that it will push “the Iraqi government and the autonomous region of Kurdistan to adopt serious measures” to support calligraphy – khat in Arabic – and its artists.

Practicing since the 1980s, his decades of experience and participation in competitions are attested to by some forty medals and certificates on display at his home.

In October he finished second in an online Egyptian competition and is currently training for a competition next month in the Iraqi Shia holy city of Najaf.

Hussein’s creations are made with a reed pen that he buys in Turkey or Iran. He sometimes sells the work for posters, store displays and even tombstones, he said.

For decades, in the major regional centers of Cairo, Amman, Beirut or Casablanca, calligraphy is displayed on storefronts, on walls with popular sayings, or on plaques at the entrance buildings to indicate the presence of a lawyer or a doctor.

Today, the vestiges of this calligraphy are only visible on the faded facades of the old shops. Still, nostalgia for the vintage aesthetic has become a trend, as local hipsters post photos of their finds for their social media followers.

But in an impoverished and war-scarred Iraq, there is no government support “whether for calligraphy or for other arts”, Hussein lamented.

“Due to technology, the sanctity of calligraphy has diminished,” he said. “Calligraphy takes more time, more effort and is more expensive. People are turning to cheaper technological production.

But it is impossible for Hussein to abandon his art. He dreams of “traveling to Egypt or Turkey and living there temporarily to improve my khat”.

At the other end of Iraq, in the southern city of Basra, Wael al-Ramadan opens his shop in an alley.

A client arrives to inquire about the preparation of an administrative stamp to confirm his presence.

Ramadan grabs one of his sharp pens and resumes practicing the art his father introduced him to when he was still a child.

On paper, he slowly begins to trace the requested words, with Arabic letters distinguished by their elegant curves.

Like fellow calligrapher Hussein, Ramadan applauds UNESCO for its “great support for calligraphy and calligraphers around the world”.

Ramadan earns money by teaching discipline in schools but also sells his skills for advertising purposes.

“We hope the government will take an interest in this art, through exhibitions and competitions,” said Ramadan, 49, dressed in black and with a shaved head.

“The survival of Arabic calligraphy depends on state support.”

It also depends on the devotion of men like Hussein and Ramadan.

“I obviously hope that my children will succeed me, just as I followed in my father’s footsteps,” Ramadan said with a smile.

Comments will be moderated. Keep comments relevant to the article. Remarks containing abusive and obscene language, personal attacks of any kind or promotion will be removed and the user banned. The final decision will be at the discretion of the Taipei Times.

Lost in Translation: A look back at the Arab world’s obsession with remaking “The Godfather” DUBAI: Remakes of Western TV shows and movies are all the rage in the Middle East these days and given the hype around ‘The Offer’, which dramatizes the making of iconic film ‘The Godfather’, we throw a look at Arab […]

Saudi Gazette report Riyadh — The Ministry of Culture, in partnership with the Ministry of Municipal and Rural Development, is organizing a calligraphy event under the aegis of the “Year of Arabic Calligraphy”. The event, which started last Thursday (August 5, 2021), will continue in 10 regions until January 2022. Artists from each city from […]

TOKYO: Born in Tokyo, Fuad Kouichi Honda is widely recognized as one of the best Arabic calligraphers in the world. The Japanese-born Muslim, who teaches at Daito Bunka University, has won numerous awards for his work, including at the International Arabic Calligraphy Competition. His most famous pieces use passages from the Koran. Fuad started learning […]