Arabic Calligraphy: The Art of Alphabets

Artists on a mission to revive Islamic art

Arabic calligraphy is an essential part of Islamic civilization and many aspects of Muslim cultural expression. However, over the years its popularity has faded among the Indian masses and artists are on a mission to revive it.

As beautiful as pearls, his works attract the attention even of those who do not know the Arabic language. According to him, aesthetics and refinement are the specialties of Islamic art.

Arabic calligraphy is a ‘cult’ for Muqtar Ahmed, a Bengaluru-based calligrapher who has gained international attention. Originally from a remote village in Telangana and currently in Bengaluru, Ahmed is on a mission to revive this endangered art in India.

“Write the Koranic verses and Hadith (sayings of the Prophet Mohammad) is worship. These works are sawab-e-jaria (continuing reward)”, says the calligrapher, who believes that there is no writing more beautiful than Arabic in the world. India Media Group. Ahmed believes his efforts have started to pay off as his followers carve out a place on a global level.

Recognize calligraphy as an art 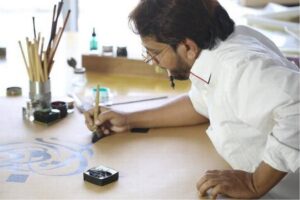 There are several styles associated with khat, as the practice is known in the Arab world. From the Kufic calligraphy which was used to copy the Holy Quran between the 8th and 10th centuries, to the most readable Naskhthe extravagant Thuluth and more contemporary variations of the practice have become popular now.

Ahmed was the first Indian to get a Ijazah (master’s degree) from the Research Center for Islamic History, Art and Culture (IRCICA) of the Organization of Islamic Cooperation (OIC), based in Istanbul, in 2013. It prepares young talents for the Institute of Indo-Islamic Art and Culture (IIIAC) in Bangalore. He has so far educated more than 800 young people including students, professionals and others from various backgrounds at the institute.

Ahmed, whose calligraphic works adorn mosques and even private jets abroad, is pleased the institute is gaining global recognition for the high standards it has set in Arabic calligraphy. He says the ijazah obtained by him earned him a lot of work in the Arab world, where Islamic art is highly valued. He was also offered a permanent teaching position there, but stayed to revive the art in India, where it had once enjoyed royal patronage.

In danger in the digital age

Unemployed after an Urdu-language daily Ahmed worked for replaced calligraphy with computers in the early 1990s, he started writing wedding cards for a living. “It was not my goal. I wanted to deepen the art,” recalls the artist who improved his art under the guidance of renowned international calligraphers Mamoun Luthfi Sakkal and Mohammed Zakariya from the United States and refined it under the direction of the Turks Hassan Chalabi and Dawood Biktash.

He further points out that the digitization of almost all art forms, including that of various types of calligraphy, has threatened the livelihoods of artists like himself and has also harmed the art form itself. 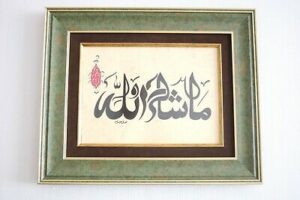 A work created by Lamees Aboobacker

Lamees Aboobacker, 24, one of Ahmed’s students agrees and says that as a child born in the 1990s she had rarely seen how much effort it took to create each piece of calligraphy that adorned the walls of his house.

Both Ahmed and Aboobacker say the digital age has posed a threat to Arabic calligraphy like never before, not least because it takes a very long time to complete. Usually, a decorative piece or a handmade board requires about a week of complex work. But with all the fronts available digitally today, it’s a matter of seconds for anyone to print a great piece. They also say that only the grand hotels, the homes of the wealthy, and those with a penchant for art understand the value of handmade work. Most of the time, people prefer a quick hack over the effort, time consumption and cost they have to bear.

“When I do Arabic calligraphy, I follow the traditional style,” says Aboobacker. Explaining the fonts she works with, she says: “Thuluth and Kufic are the two fonts I usually use and are generally preferred by my clients. fonts like Muhaqaq, Naskh and Thuluth are linked and follow curved and oblique lines. However, Kufic is more block lettering,” the artist explains.

Ahmed, who uses special handmade pens for his writing, says he achieved precision with perseverance. “Even a small piece of calligraphy takes several hours. You have to write a letter hundreds of times to be accurate,” he adds.

“What I love about Arabic calligraphy is how hard it is to make it precise. In English we have 26 letters and there is only one way to write them. But in the Arabic language, a letter has 12 formations that make it difficult. It takes passion to move forward, “she says. To write a small calligraphy, it takes several hours. With background colors, it can take even a day.

According to Ahmed, this art in India experienced a continuous decline after the end of Mughal rule. He plans to open another branch of his institute in Lucknow and says that with more young people showing interest in Arabic calligraphy, the art has a bright future in the country. “With the increase in the number of students wishing to learn Arabic calligraphy, we both hope that our hard work and dedication to this art form will revive it in India and bring back the glory associated with it,” adds he.

Arabic calligraphy in full awakening in the Arab world

Professor of Arabic Arts and Calligraphy and Vice Dean of the Faculty of Education at Umm Al-Qura University in Saudi Arabia, Dr. Abdullah Fattini, says Arabic calligraphy is currently experiencing a state of awakening in the world. Arab World.Renowned Saudi calligrapher Dr. Fattini is taking part as guest of honor at the 7th Fez International […]

Jeddah: Coinciding with World Arabic Language Day celebrated on December 18 every year, Universal Premium Motors agencies, Hongqi’s official distributor in Saudi Arabia, organized a special celebration for Arabic calligraphy to demonstrate the harmony between the beauty and design arts of Arabic. the calligraphy and designs of Hongqi, the future luxury car, which has always […]